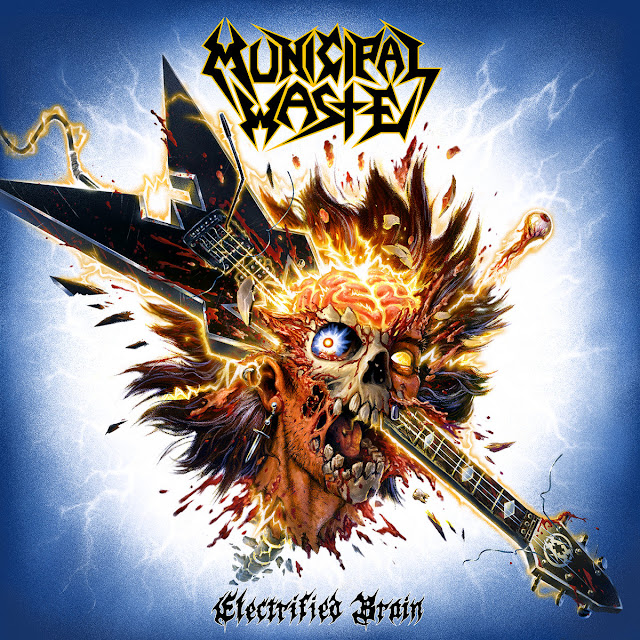 “It was a pleasure collaborating with James Bousema," reveals guitarist, Ryan Waste, to And Justice For Art. "Even though it was our first time working together, we clicked immediately, bonding over classic Heavy Metal album covers and horror films. I had the initial idea of a guitar stabbing through someone’s head and the electric currents charging into their skull, lighting up their brain and eye sockets. The band suggested we use my signature custom guitar, the MW-AX, which is similar to a flying V, but in the shape of the M in our logo. I sent the artist detailed reference shots of the guitar which was built by Rob Gray at RIP Custom Guitars. In reality, the guitar is actually pointy enough to puncture someone."Ryan says the group "wanted the entire piece to feature one bold, iconic image that would be unmistakable from a distance. A lot of our past album covers have had busier backgrounds, so we narrowed down the focal point for this one. Although James did not sacrifice any detail on the head of this undead Heavy Metal rocker. From the dangly dagger earring, chipped teeth, broken strings and gory brain bits to the flying gnarly eyeball, we left it up to the audience to decide if our electrified 'victim was in pain or enlightened by the surge of power! Either way I think it encompasses the aggressive nature of the band while simultaneously exuding our infectious high energy.”"Electrified Brain" is now available via Nuclear Blast. Check more information at Municipal Waste's bandcamp https://municipal-waste.bandcamp.com/Discover more stories about Hard Rock and Metal album covers in the book "And Justice For Art...Live!" at