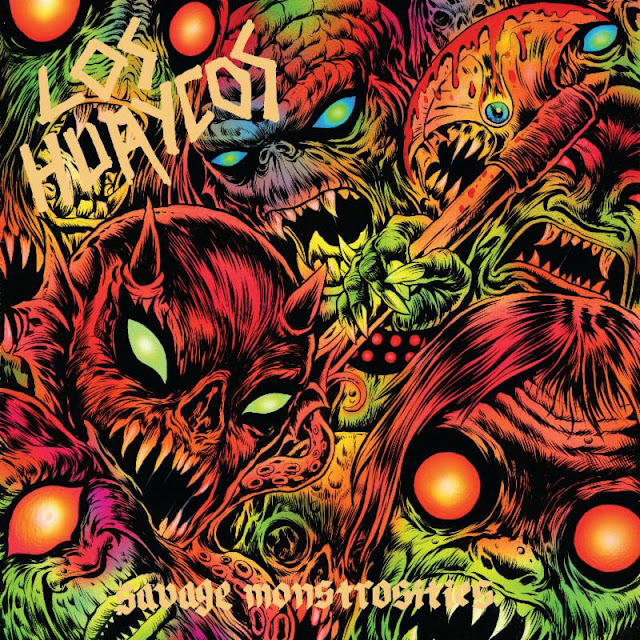 Peruvian Hardcore/Punk collective, Los Huaycos, are releasing their vicious new album, "Savage Monstrosities," on February, 2019. Its colorful yet menacing front cover artwork was created by The Art Of Skinner.

The American artist (who has worked with bands like Mastodon and High On Fire) was the man the band wanted from the beginning but "we didn’t hit him up originally because we knew he’s too busy,” says bassist Mark 'Professor Markarian' Reategui. “But the artist that we did have cut his hand super bad and sent me a photo of his bloody hand while we were at band practice." After showing the still to Skinner, the artist decided to make some time in his busy agenda to help to group. "Things coincided and the best possible option worked out!"

Reategui explains that the band "wanted 'Savage Monstrosities' to be the concept. Skinner interpreted it as monsters going wild in a pit. And we asked if he could put in a hand with an ax. We looked at some old horror comic books like EC Comics for inspiration."

The American artist produced a piece that showcases most of his established visual and stylistic trademarks, including strong-yet-fluid lines, trippy shapes and a psychedelic color palette. Los Huaycos’ bassist reveals that guitarist Renzo "El Morf" Gianella bought the original artwork. "It was awesome," Reategui admits. We've been fans of his art for years."

Los Huaycos' "Savage Monstrosities" will be available on February 2019 via Tankcrimes.