The Crystallomantic Art is a small design boutique dedicated to produce twisted graphics for many underground Metal bands around the world. The man in charge of developing such visions works under the moniker of Wolven Claws. One of his latest projects is a series of grotesque illustrations created for the album "Sepulcrum Viventum" by Death Metal collective, Austerymn. Below, the artist reveals details about his collaboration with the Greek musicians and the creative process behind the "Sepulcrum Viventum" cover art and inner illustrations. 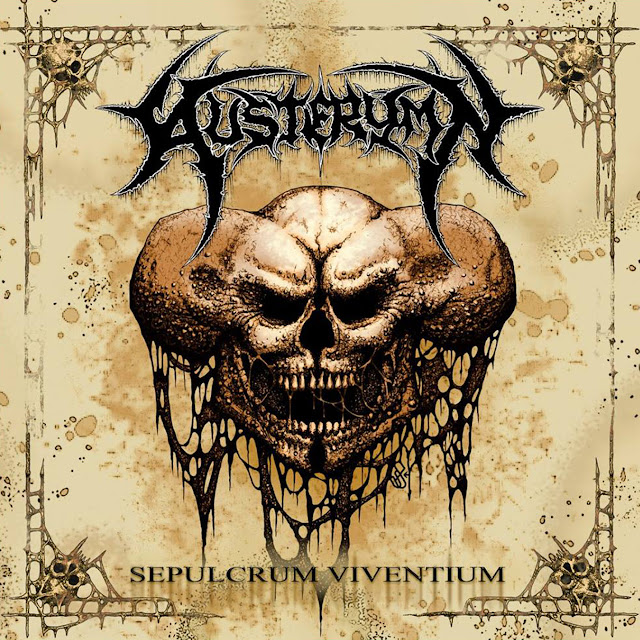 AJFA: How did you became involved with Austerymn and this particular project?
Wolven: I have worked with Austerymn before. In fact I have created a number of artworks for them over the last couple of years, cassette covers, shirts etc. Most of these are now featured in the rest of the packaging for this release. It's kind of like a CD sized Wolven Claws art portfolio haha!


In fact, this is not the original artwork that I made for the album - the original art was entitled ‘Hallucination Du Sabbat III’ and featured two gnarly undead extraterrestrial females about to go down a goat phallus which also doubled up as their nipples as they were conjoined twins, joined at the breast . It sounds rather bizarre but that is the art that drew the attention of Rik Simpson (Austerymn guitarist/vocalist) and I have done their artwork ever since. That art was created for Austerymn over two years ago but when the recording was almost finished the other guys in the band had a change of heart about the cover, for whatever reason. So instead, they chose another one of my existing artworks.
AJFA: What inspired the concept for this artwork?
Wolven: I created the artwork over a year ago. I tend to go through spells of creating similar themed art at the same time, such as the different Baphomets. For example, I am currently working on a series of works simply entitled ‘Impalement’, which is pretty self-explanatory. The ‘Sepulcrum Viventium’ artwork, or ‘Triskull’ as it has become known, was one of a number of artworks I did using conjoined skulls as a theme. I did one artwork which consisted of two skulls facing each other with an inverted cross between them but as I looked at it I realised that if I pushed the two skulls together they would actually create the illusion of a third skull facing the viewer in the middle so I created another drawing using that idea and that is the one on the Austerymn cover. 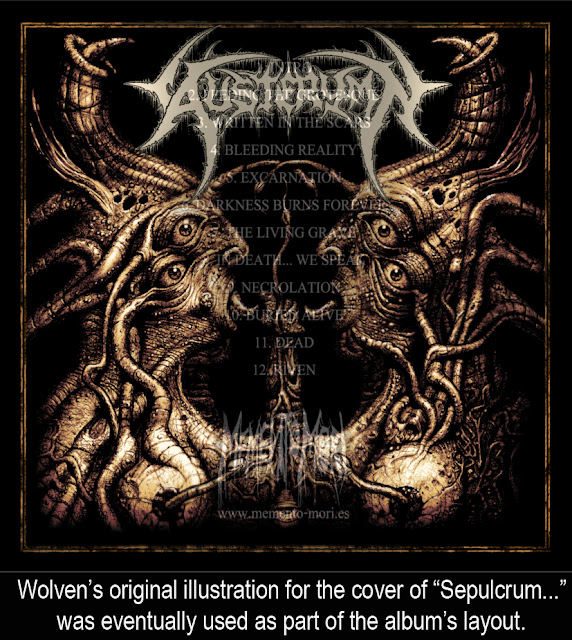 AJFA: What technique/medium you used to create this particular artwork?
Wolven: The actual art is created with ball point pen on art paper, as is all of the Austerymn stuff which I have so far created. After the band chose that art, I combined it with some already existing skull borders which I had also drawn in ball point pen and whizzed it all up on the computer and hey presto; ‘Sepulcrum Viventium’.
AJFA: Are there any other illustrations made by you for the album's booklet?
Wolven: Yes, some of the other artworks that I have made for Austerymn have been reproduced in the packaging for this album, making it a 'bumper pack' of my art. The original cover I mentioned is partly featured on the back of the CD case. The ‘Masticating upon the Entrails of the Undead’ art which I made for their ‘Dead’ t-shirt last year is in there too. The ‘Riven’ artwork which I made for the cover to their official ‘In Death…We Speak’ cassette is featured behind the lyrics as is the fold out art of the cassette. The track ‘Riven’ on the album was actually inspired by the art. I also made a couple of exclusive artworks for the album, one of this was used for the disc tray, the other one seems to have disappeared up its own arse.

AJFA: Have the band sent you any impressions about the finished artwork?
Wolven: The band loved it as it was actually chosen by them. I have seen the printed version and it looks awesome.
AJFA: What are your next projects?
Wolven: I am currently working on a number of projects. I have just done the shirt for the Farmageddon Open Air Festival in Canada, and I am working on some designs for Demonic Extinction (US). There are a few artworks coming out later in the year. Burning Hatred's ‘Carnage’ is one to look out for as well as some others but unfortunately I can not disclose them yet.