Nowadays, most of humanity is living under quarantine, trying to fight certain lethal virus that has caused devastating effects around the world. Being trapped without having access to 'real' social interaction has become a titanic endurance test. However, it can also be an opportunity to discover new experiences that could lead people beyond the physical walls of their limited living spaces. One of those experiences that can be discovered and enjoyed from home thanks to the wonders of technology is "Midnight Cemetery." This virtual reality tour/exhibit was created by talented multi-media Romanian artists, Adrian-Tabacaru official and Costin Chioreanu and takes visitors inside a ghostly cemetery that looks like nothing you've seen before. In the following interview, the artist talk about the creation of this immersive experience that could revolutionize the perception of album covers in the near future. 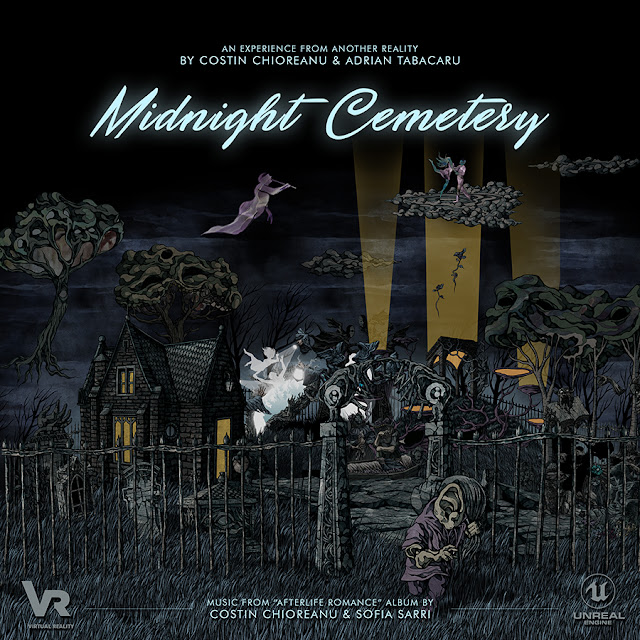 Can you describe for readers what is Midnight Cemetery?

Adrian Tabacaru: The Midnight Cemetery is a visually striking Virtual Reality experience. It's a place where you can explore and interact with Costin Chioreanu's vibrant artwork he made for the album "Afterlife Romance," an album composed and performed together with Sofia Sarri. A place where everyone is invited to explore a suspended space, surrounded by mysterious characters frozen in time.

Costin Chioreanu: Well, what can I add? It's most probably the first interactive cover artwork. Basically, you can literally (in virtual mode, of course) can visit places which until now were designed for illustrating the booklets of the "Afterlife Romance" album. I think, at least for me, this is the greatest achievement of all. Adrian did an amazing job also with sound and animation... so yeah, I am beyond excited by the result!

What motivated you to work together on this project?

Adrian Tabacaru: I love Costin's artwork, it's two-dimensional substance, and thought that it will look amazing to extrapolate this space by bringing the third dimension to it. Adding depth would make everyone feel immersed. This would provide the things that were always missed in an illustration: the 'immersiveness and the interactivity.' I was trying to re-create the atmosphere I felt by exploring Costin's artwork and to create a new interactive world.


This is the thing I dreamed ever since I was a kid that is to be part of the illustration. Back then, I was just imagining it, now it's real...well...virtually-real.

Costin Chioreanu: When I discovered Adrian's work, I got blown away and I couldn't stop my expansive mind of thinking how I could access this world and what amazing things are waiting there for me to discover. It did not took me long time to realize how interesting my work will look like in another dimensional spectrum. I mean, I started with illustration, the next level was to bring my way of doing things in the 2-d animations which are the base of almost 90 videos I've done for bands in the last years. So... this collaboration came to me as a logical next step in my endeavor. So I feel extremely accomplished!

Adrian, from the technological standpoint, which were the most challenging aspects of this project?

Adrian Tabacaru: I am far from what a technician is able to do, my academic background is musical. I'm actually a techno-fluent computer-composer, a musician who likes to explore technology and express in modern ways. The challenge was that I had no idea how to do it and this is the most beautiful challenge I will always love to do.

How was the development processes? How did you distribute the workload?

Adrian Tabacaru: It took about 6 months to create this experience, Costin was providing the artwork elements in detail, with each individual layer exported separately, and I was trying to recreate this in a three-dimensional atmospheric space by adding animated 3D elements, depth, and interactivity to the characters.

Costin Chioreanu: Yep, and before all this I spend weeks on creating the native illustrations for my album which is by far, the most complex set of illustrations I ever made for an album booklet. And that is because the album I did with Sofia is super personal and an extremely important record for me.

Can you tell us more about the music used for the project, the "Afterlife Romance"?

Costin Chioreanu: Yes, it is an album where I composed and recorded all the music and Sofia took care of the vocals and lyrics. But everything was worked as a conceptual album, from writing music to writing lyrics and interpretation.

It is a, let's say, a more romantic Avant-dark-Prog version of a King Diamond story. It is not that horror, it is not Heavy Metal, but is more spiritual and more eerie. The album speaks about the story of two ghosts, living in a cemetery, who got in love in one of the nights. The cemetery is a system/society between ghosts, is a complete world, and there are rules to be respected as well. Our two characters are getting into some problems because of that, but in the end they escape using the most unexpected trick ever.

This is a groundbreaking project. As you mentioned, it's probably the first cover artwork that has been transformed into a true multi-dimensional experience. How's been the overall reaction to the project so far? Would you do something similar again?

Adrian Tabacaru: Being a worldwide premiere in this field, people don't know yet what to expect and how to react. I am sure that in time, when Virtual Reality technology will become more accessible, more people will understand it. For sure we will continue to do this kind of experiences. Currently, we are just scratching the surface and the future holds amazing things in this effervescent world.

Costin Chioreanu: I totally agree with Adrian and I really think people from the industry should carefully check this out, because it can become a new way of promoting music in the new world which is forming as we speak. They should take this very seriously as it can be very easy and vital part of the future. 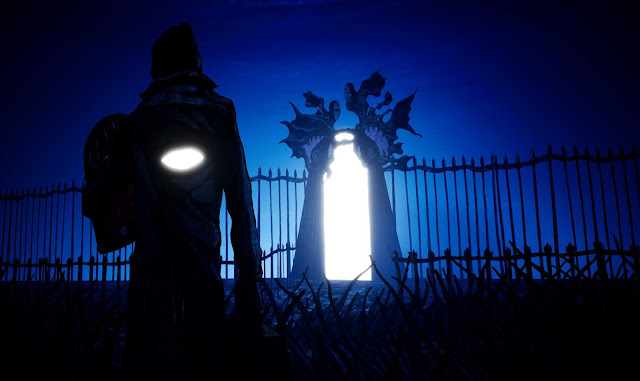