In recent years, Brazilian designer/musician, Marcelo Vasco has been leaving his visual mark in the Metal scene thanks to his album covers for Metal heavyweights like Soulfly, Borknagar and Machine Head. Recently, Vasco's pedigree went to roof thanks to his latest design: the cover for Slayer's long-awaited album "Repentless."

The quasi-monochromatic art follows the same blasphemous discourse explored on previous Slayer album sleeves. Below, the artist discusses, exclusively for And Justice For Art, the details behind the creation of this soon-to-be-classic cover. 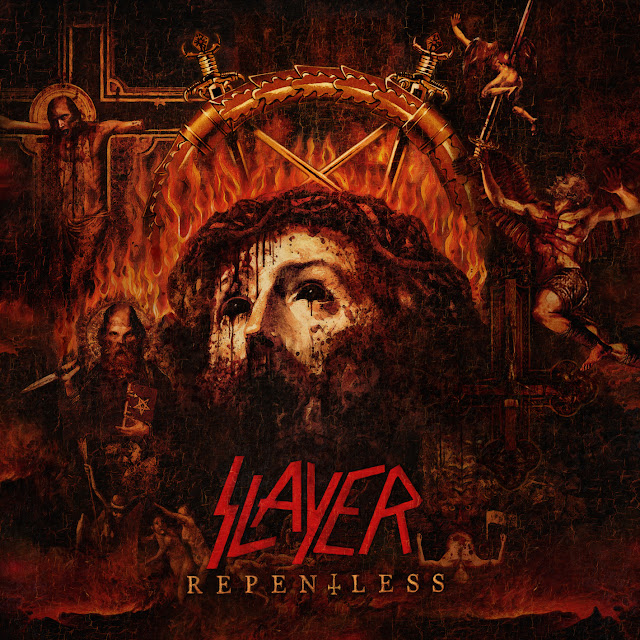 AJFA: Vocalist/Bassist Tom Araya recently commented that Slayer had a number of submitted ideas for the cover artwork. How did you become involved in the creation of this art and how did you submit your cover concept to the band?

Marcelo Vasco: I have been doing some artwork for Nuclear Blast for a long time. They like my artwork style and know I'm a huge Slayer fan, so they invited me to work on this, proposing some ideas and directions. They said that initially there were other artists also trying but would be nice if I could be involved. And that was what I did…

AJFA: What inspired your particular idea/concept?

Marcelo Vasco: Everything I created was based on the album title and also on some ideas that could represent the “old school” Slayer approach. As a huge fan of the band I just wanted to make it look like one of the classic covers, Slayer being Slayer!

AJFA: How did you react when your cover idea was selected?

Marcelo Vasco: I got veeeery excited, of course. This is something really important to me, not only professionally, but personally. Slayer is my favorite band of all the times since I was a kid.

AJFA: This artwork really doesn't add anything new to Slayer's previous blasphemous discourse. However, it definitely reinforces their unapologetic attitude especially towards religion. Conceptually, it's a sort of continuation of the themes explored in most of their previous covers. What's your opinion about this?

Marcelo Vasco: As I said… It’s SLAYER being SLAYER. There’s no point to be “new” or try any different, modern or experimental shit. It’s boring! Metal is becoming so boring and gay today. I’m an old school fan and my vision was exclusively that when I was creating the cover. I couldn’t be happier with the final result. And of course, all requirements and suggestions they gave me during the process were very solid and made the cover even more special. Looks like a classic Slayer cover and that’s what I was expecting as the artist and as an old diehard fan. I’m sure all REAL old school fans of Slayer will enjoy it somehow. 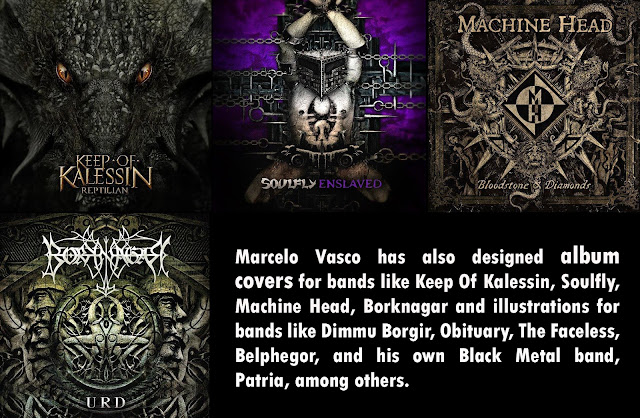 AJFA: Let's talk about the technical aspects behind the artwork and the making-of process.

Marcelo Vasco: 90% of my artwork is done digitally through a mixed media process. I work manipulating images and photos, doing collages, working with textures/brushes and even freehand drawing a little bit. I’m always trying to give my art a more organic feeling despite it’s being created in a digital environment. I’m constantly evolving on this area and this specific cover was made to look like a real painting, which was a huge challenge to me.

AJFA: Funny that you mention that 'classic painting/canvas' kind-of-look because that is the next question. How did you do that?

Marcelo Vasco: That was one of the biggest concerns about the cover finish… And wasn’t easy to give it that old painting texture. I had to do many many tests until reaching the ideal look. I worked with billions of layers and different textures. I even tried to simulate real strokes and that canvas look as you mentioned. If you have the chance to check the artwork in a bigger format all this can be noticed. It looks pretty cool! Well, the classic Slayer covers have this feeling and the band would like to keep that for the new one.

AJFA: And what about of the new metallic, armor-like look applied to the Slayer logo?

Marcelo Vasco: Regarding the Slayer pentagram behind, the idea was to make it as part of the painting and since it’s a dark red/orange cover with a lot of fire around, their “shield” should be follow this same aspect… Like metal forged on fire as an armor/sword. That was the idea.

AJFA: Araya also said that despite being your idea, the band also made some suggestions. Can you tell me more about the band's participation in the creation of this design?

Marcelo Vasco: Yes, there were tons of tests before we have reached the final direction, so it’s difficult to talk about this… It was a long process and we went through many tiny details. But what I can say is that the Slayer pentagram as a big halo behind the Jesus was one of the band’s ideas. Another thing we tried on many different ways was the cover color tone, and also the size of each element on it, specially the Jesus in the middle. That damaged old canvas touch was another important concerning that took a long time to achieve. 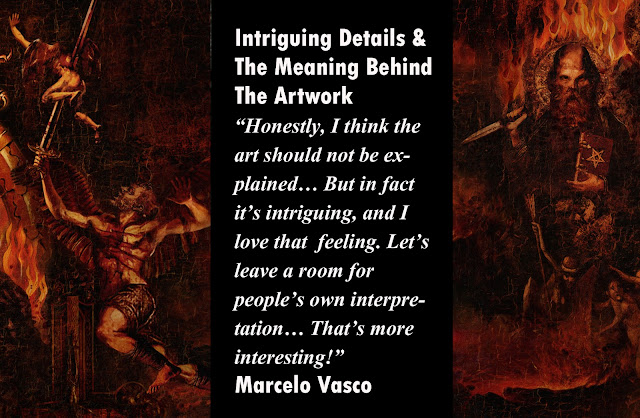 AJFA: Most of your previous artworks have the tendency to be very symmetrical. This new cover breaks that mold for the most part. Despite having the Christ-like face in the middle as a focal point, you can look at the artwork and notice many different things happening. Was that lack of symmetry, a conscious effort?

Marcelo Vasco: That’s true. But it was not exactly a conscious effort at all. I just thought that a more chaotic and unsymmetrical illustration would fit better for a Slayer cover. As I mentioned before, when I started to create the drafts I had some of their classic covers in my mind, like Reign In Blood, Hell Awaits and South of Heaven, so maybe it subconsciously guided me a little.

AJFA: By now you've been designing artworks for bigger bands like Soulfly, Machine Head and now Slayer. For many artists, it doesn't get any bigger than this. How do you feel about it? Do you think this artwork could open new professional opportunities for you in the near future?

Marcelo Vasco: I’m sure it will open new doors and that’s amazing. I really love to do my work and I’m always looking for new challenges. I did a bunch of special covers, not only for major bands though. I really love some artwork I did for unknown and small bands… Art is always art and that’s what fulfills my heart. Besides music it’s my main passion! But Slayer is definitely my biggest achievement just because they’re my favorite band ever. They’re part of my graduation as a Heavy Metal fan, musician and why not to say, graphic artist. Man, I’m so proud of myself! Haha... And honestly I still can’t believe I did it. So unreal! 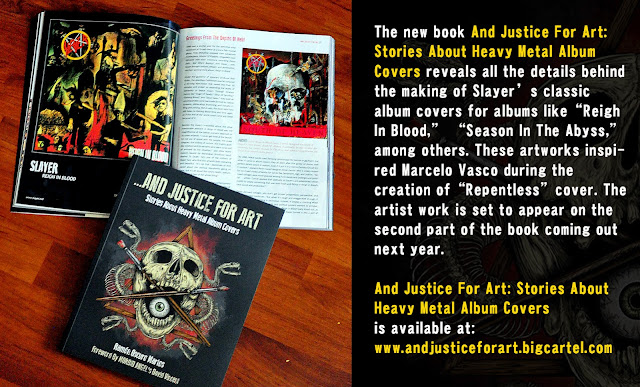